The Holiday post - how to stay charged in a strange place

Having returned recently from a week in France for holiday, I thought I'd write up some quick notes on how solar life went.

Details: We were out there for just over a week, staying on a shady campsite for most of it, and in a more urban setting for a couple of days. The weather was basically sunny and hot, until the last few days when we hit storms and clouds, with intermittent sun.

Having seen the forecast before we went, I was pretty confident that topping up batteries wouldn't be a problem. Some types of travel might be harder (eg. cities with high buildings, or walking tours where you're always walking south with the sun on your front?).

The ideal routine for charging batteries is to leave the panels and battery somewhere all day, or at least as long as possible. This meant an interesting first few days, scoping out the campsite, looking for possible good spots. But what counts as 'a good spot' when you're traveling around?

1. Decent angle for solar input. At home (see previous post), I have a handy low shed roof, angled at 45 degrees and south-facing. It turns out that such a handy surface isn't always available - in this case, most of the campsite was shaded by trees (good for humans...) or roofs were high and inaccessible. You might need to climb a little. Or you might be able to find a decent tree with sturdy branches that you can 'nest' the panels in. Get creative when looking, be bold.

2. Somewhere you can leave a panel for as long as possible. Bearing in mind that the Sun moves round (or, ok, the Earth does), you may need to move your panel part way through the day. It took me a day to realise this so lost half a day to shade, and I ended up picking two sites, and knowing roughly when to transfer the panels from one site to another. Don't forget to pick your panels up at the end of the day! But also - don't let your solar routine ruin your holiday activities ;-)

3. Somewhere generally safe. This is trickier. You'll have to use your intuition and sense of trust here - are the people in the area generally trustworthy? Or are there any people you can ask to keep an eye on your panels? I ended up leaving mine by a cafe which was open from early til late - the campsite was safe enough, to be honest, but I asked the cafe staff if I could leave the panel there, and let them know when I picked it up. Be safe, be respectful.

My second spot was near our tent, but slightly out of view. There was public access to the path it was by. My main concern was more about dogs peeing on the panels, rather than someone pinching them, so I experimented with attaching kit to a nearby fence too: 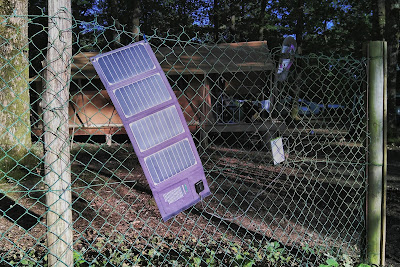 With spots and security sorted out, I managed to do some semi-decent charging up. I also used the holiday as a great excuse to throw my phone in a bag and leave it there as much as possible. Apparently data roaming in Europe works just like being at home these days, so there are no more data excuses for not checking emails.

But staying off the phone meant my battery life got stretched out more. Not as much as I hoped, I admit - I spent some time tidying up my phone when I got back home, but more of this in another post. Enough to say that turning off Background Data made my phone oddly unresponsive, and I'm not sure if it helped the battery much overall. One to experiment more with, anyway.

So, that was holiday. It's not easy when everything is unfamiliar, when you're not so sure how long you have to re-settle. Take enough batteries, get them charged as much as possible before you go. Recce like a pro. Preserve your energy. Take what sun you can get.