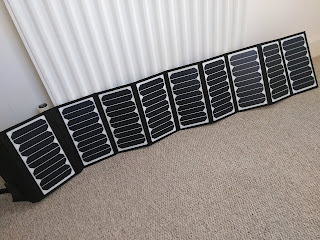 It's pretty sunny recently. All batteries are full. A quick test shows this gets very nearly 2A (around 1.95A) in direct sun, where the 20W panels hit around 1.5A. Time to level up...
Posted by Scribe at 10:18 pm No comments:

One of the key questions going through this exercise is on what next? I'm deeply aware I'm at the start of a personal journey - that others know more about electricity than I do, or have richer setups, or endure with less technology. But all experiments at this small scale should be a personal endeavour. So, in fact, the question is - what's next for me?


At the end of last year, I grew a bit tired of trying to read RSS feeds and do emails on my phone. At the time, I made a conscious decision to do more email on my laptop instead - I love the feel of physical keys holding onto  my fingerprints. The travel and bounce seem to convery more speed and emotion than any virtual input device. It's a hard habit to shake. Moving to a laptop for email was pretty easy though.

This didn't work so well for RSS feeds though - laptops are too bulky and intensive for lightweight reading. I'd had a couple of tablets before (through work), and I also have an old Kindle which is OK for reading e-books, and I wanted something similar. I liked the idea of separating reading out into its own function, isolating it from other network activity. Distraction-free, I'd be able to lose myself in some of the longer form articles I've been saving up to read for months now.

So this was my plan:
After some research on devices supported by LineageOS, I managed to grab a cheap 2013 Nexus 7 off ebay. Bonus marks - the seller had already installed Lineage on it! I was happy to pay an extra 5 quid to save a few evenings doing it myself...

So this is now A Thing. The reader device is great - F-Droid and ttrss and wallabag all installed within minutes. I'm resisting putting the Medium app on, but it may be useful. I'm also trying to find alternative routes to hook together ttrss and wallabag with other services - so far, I'e set up IFTTT to tweet out things tagged with certain text, or to save to Evernote notebooks. Eventually I'll look at replacing these with FLOSS as well. And the battery on the Nexus seems to hold well, only dropping 3-4% over a few days of non-use.

The Separation of Functions


Most of all, I have become fascinated idea with this initial idea of defining a use case for tech in my life - reading RSS feeds and saved links, in this case. I feel like that defines the value clearly, and from there, I can work out if it is a function which is - or could be - powered by my current solar setup (ie. do I get enough sun light, and can I get power to the device?)

In other words, by tying and restricting certain functions to particular software AND hardware, I feel like solar power is "sponsoring" certain of my activities now. The ttrss/wallabag server is still mains-powered, yes, but Raspberry Pi's are pretty lightweight. This way of thinking extends out to other things hopefully - anything my phone is primarily responsible for, and then the afore-mentioned Kindle, and then even things like portable gaming (thanks to the new USB cable for the old Gameboy Advance).

This feels easier than just trying to power everything, indiscriminately, into some vague solar-powered bubble. It means I can take a more considered approach to power management (both on the devices themselves, but also for panels and batteries) and prioritise between functions as the batteries run out. The eggs have been divided up into more basket, now.

So this feels good. Coming soon - I've received a new USB-A to USB-C cable, and I'm writing this post on a laptop charged up on solar power for the first time. Bring it on!

Posted by Scribe at 9:13 pm No comments: