Winter Solstice: End of the Road

So the clouds and the dark are here in abundance now. 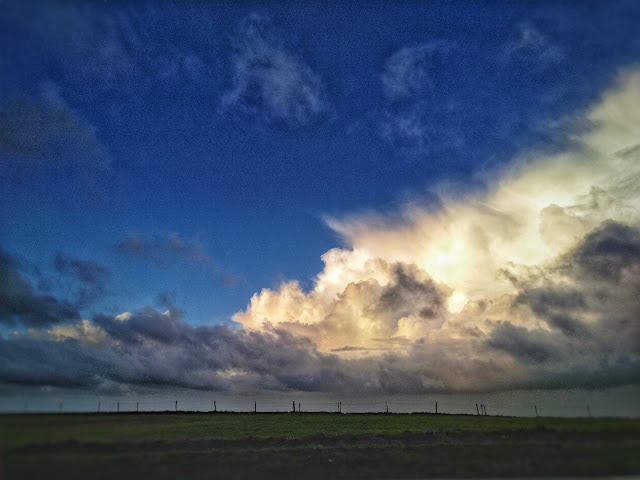 As Christmas rolls in on Atlantic winds, my ability to get panels in front of sunlight is diminishing. The odd nice day here and there provides maybe a couple of hours of weak light, which isn't quite enough. The risk of my phone failing when I'm somewhere random is pretty high, and the situation isn't helped by a recent Android upgrade.

(Fairphone released an Android 7 update recently. The battery management when not in use seems good, but I'm getting a lot of battery drain under normal usage, like writing this post. Yesterday I had a drain from 40% to zero in 10 minutes, indicating perhaps something more fundamental is wrong.)

So I'm going to call it for the year. I think I have just enough battery left to last till tomorrow, which symbolically is the winter Solstice and the shortest day. I like the synchronicity there, and so plan to use my phone as little as possible today, and end the solar cycle after 7 and a half months. Which ain't bad.

(My Pebble watch already switched back to mains a week or two ago.)

I'll use the next couple of months to take stock - maybe a review of the year, what I've learned, and what I want to do differently next year. With a bit of luck, the light will be ok again from February onwards, so I'd love to get my plan sorted out before then, ready to go. Maybe permanently in-place panels, more batteries, etc. That kind of stuff. Also, MOAR READING about electricity generally, probably.

So if you've been reading these posts, thanks for that. It's been a long time since the start of May, and hopefully this blog proves that it can be done.

To the future!
Posted by Scribe at 9:05 am No comments:

The Bleak Midwinter: A Guide to Minimalist Phone Activity

I knew clouds would make things interesting (see last post). An abundance of sunshine allows for laziness - it's the deep darkness of winter where necessity becomes invention.

Currently battery levels are low - I have maybe 2 or 3 charges left, which is 2-3 days on normal summer use. It's Tuesday today, and the next predicted sunshine is for Friday. That's a bit too close for comfort.

So I can't skip to the Southern hemisphere quickly, or seed the air with magic cloud-dispersal beams. I can only change what's in my control - and that comes down to what my phone is doing.

As a guide to future me, and for anyone else interested in phone efficiency, here's a rundown of what I'm doing to help save battery life as much as possible. And judging by the battery chart for the last two days, it's having a good effect: 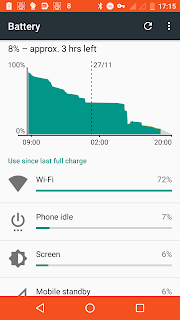 Two days is a lot better than one day. (The upwards blip three-quarters of the way through is when I plugged directly into the solar panel.)

So here are some current suggestions.

Some people can live with only a few apps. I'm curious about what's out there, to get interesting ideas. And I have kids, and yes, sometimes a phone is the easiest way for a bit of peace and quiet. So there's a fair amount of 'gumph' on my phone.

Step one is to uninstall what you don't need. This has three aims: first, stop any unnecessary background tasks/data usage. Second, to avoid any extra load caused by installing updates (especially if you have them turned on automatically, via your usual app store). And third, to stop using your phone for distractions. Sorry kids! Here's a pack of cards instead.

It seems annoyingly difficult to control how much apps check in to their home server - a lot of them let you turn off notifications but it's not clear whether they still request data or not. Assume that they do, because capitalist tech and it likes to know everything about you. But that all takes energy too - I often see a battery drop of a few % straight after connecting to wifi for the first time in a while - I assume a bunch of apps are making the most of the renewed connection.

On Android, a couple of apps can help here. I've started using these:
Do a bit of detective work to see what's connecting, but ultimately, lock down network access for anything non-essential, and feel free to open it up later on, on a per-app, per-need basis.

This has been my favourite part so far - there are plenty of apps out there to help you monitor and cut down how much you use your device. I've been trying out:
There are a whole bunch of these kinds of app these days, which is probably a good thing. I don't have the battery to install too many ;-) so let me know if there are any in particular that you think are good.

I started doing this when I was on holiday and started running out of juice. Back then, I was also manually disabling background data, but I suspect battery saver mode and using NetGuard basically covers it.

On Android 6, it's fairly easy to access - I drop down the top menu, tap the battery icon, hit the three dots and go into "Battery saver". There are probably faster ways to turn it on and off, but it doesn't matter too much when you're only using your phone 10 minutes a day ;-)

The main issue with killing off background data is probably around instant messaging apps, such as Signal and WhatsApp. You may want to avoid battery saver mode if you're expecting urgent communication. Personally, I don't use WhatsApp, and the few other people on Signal generally don't require an urgent reply...

5. Figure out the energy-expensive apps

Over time, as I've got more sensitive to battery usage, I've noticed certain apps  and behaviours really drain the battery, so I've started avoiding these.

In general, I find the Camera app - with its live video view - fairly intensive. So back to good old analogue film there, whoop!

6. Lock everything down overnight

Finally, just get really paranoid about battery usage, and keep a close eye on what your phone battery is doing incessantly ;-) At night, stick everything into Airplane mode, try out Greenify to kill off unwanted processes, and remember to turn it all back on again in the morning! (Device automators such as IFTTT and Easer don't seem to have the ability to set Flight Mode under Android 6, but YMMV.)

In addition to all this, I've also started switching off Bluetooth when absolutely necessary (which means my watch no longer gets notifications - I do prefer the gentle buzz and otherwise silence, over udio prompts though, so will try to turn this back on soon). And I'm trying out locking the screen to Portrait Mode - I have no idea if this saves anything though.


Has it all helped? See for yourself... 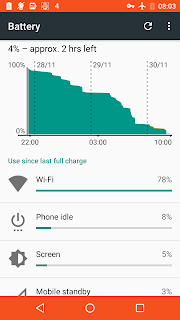 Getting about 2.5 days on a single charge, which makes a big difference in this weather. I figure I can harvest about 5000-6000mAh on a sunnyish day, which is only maybe 2 or 3 charges, so the difference between 2 days and 9 days is huge.

The grey days and rainclouds are persisting as I near the 7-month milestone. Will I make it much further though?

Posted by Scribe at 9:48 pm No comments: