A brief post, as I'm a month in and not really finding the time or energy to blog at the moment.

The Sun has been tentative and diverse, swinging between June heat and April normality. I've not had much of a problem staying off the grid - mostly - but have been using the first month to get a few things in place. And, as you'll see below, a few things have meant I've not been as pure as you'd think...

First up, I picked up some tiny cables cheap, as one of my older ones has worn at the connection point, and I only have one other short one. I like short ones, after last year's experiments proved themselves worthy.

I went for a pack of five 10cm ones sported as 'high speed charging' cables, but in practice I've been getting some iffy results - including charging apparently just stopping after a few minutes. Need to look into this - not sure if it's the cables or the power pack at the moment, hence my italics. Maybe they're overheating - I tried them on a very bright day. Hopefully I'll get a chance to do some tests soon though.

I thought I'd take no chances though, so have also picked up five 1-foot nylon braided cables as well. These seem pretty sturdy and clip in really firmly, so I'm pleased with these. And I figure a dozen short-length cables will keep me going for a while, even if I use some for battery-to-device instead of from the solar panels. 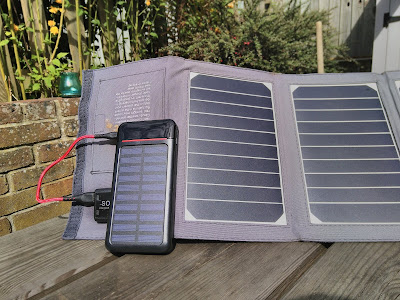 The very obvious downside of short cables, though, is that you have less room to maneuvre your power packs and devices. Which makes it more likely you'll put them in a precarious position. Which means they're more likely to slip, slide, fall off, and crash to the ground. AS HAPPENED.

'Big red', my 24000mAh pack took a bit of a fall. I knelt down to pick it up, and noticed the landing had popped the case open a bit, and further testing showed one of the charging lights not working. I'm hoping it's just the light, and plugged it into the mains to test the charging functionality - I think it is just the light, fortunately. But I had a go at popping the case open, so now I at least know what's inside. (Damn, must take a photo next time.)

I also figured, as I'm at full charge, that a new power pack would be economically a good decision at this point. I wanted something big, as I'm starting to eye up more devices and bigger panels. So I opted for the Rleron 25,000mAh pack - firstly because it has a (rather token) solar panel on it which looks cool, and secondly because it's red. Everything is going red, apparently. Why not?

So that's what's in the photo above. Red trim.

TBH, I've not had much success charging things up today, and not sure why. Maybe it was cloudier than I hoped - I still think charging circuits struggle with remaining plugged in but with intermittent shade. I need a morning at home to work some things out, but it's not looking likely - May is hectic.

Posted by Scribe at 9:42 pm No comments:

Springing back into action

*Takes blog out of box, sets it on the ground*

*Presses button, steps back, peers in.*

Hello blog. Can you hear me? You on? Great.

Date now is .. April 10th. It's sunny today! Yesterday was wet, and a few weeks ago it was the spring equinox. Before that, we had a balmy few days in February and people got proper spooked, I reckon. Since then, who knows? Hail, snow, storms, and sun. The shadows are getting shorter and the clocks have gone forwards. I'm reminiscing to the other side of the calendar. It's time to get this project running again.

So I decided to switch back off mains power a few days before April started. My USB batteries still had some mains charge in them though - I like to think of it all swirling around inside like soup, mixing with sun power as time goes on, like one juice drifting into another, yin into yang. Grid energy in increasingly homeopathic quantities.

Feels good to get the panels out again. 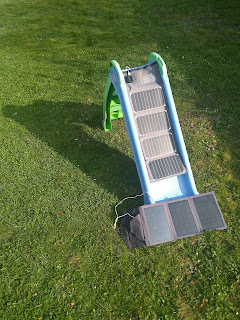 I'm starting back in slowly, no major changes. But in the back of my mind, I'm building up a list of things to do this year, from the tiny to the large. Here's my mental list currently:

In terms of what I want to aim for, there are some clear wins potentially:


So plenty of ideas, and a whole summer ahead...