Hold all my calls (overnight) 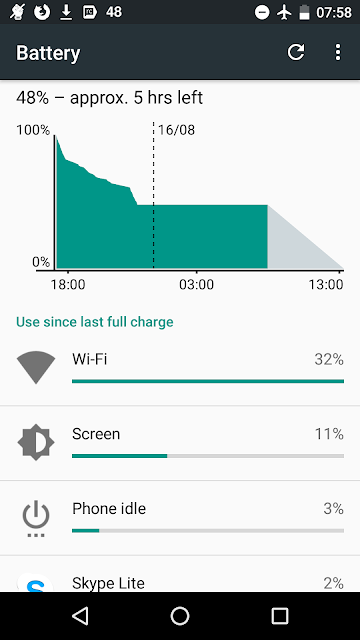 One of those small changes in routine recently - I've switched back to putting my phone on Airplane mode overnight. I'm sure I used to do this, and stopped for some reason - maybe I wanted to keep my watch connected.

I had mixed results just switching off WiFi overnight though. Got a gut impression that the power management in Android 6 was better when left to its own devices, as it were. Sometimes the phone seemed to use more battery overnight when I turned the WiFi off. Airplane mode seems to give a consistent, fairly flat line though, and I lose a few % on my charge, but generally a very minimal amount. Airplane mode also removes the risk of falling back to network data usage if I've left that on.

Sadly I don't have controlled experiments on this stuff. I seem to have developed a bit of an "instinctual" approach, which works for experimenting quickly, but leaves write-ups a little vague and subjective ;)

Anyway, for now I'm sticking to Airplane mode overnight for both my phone and my watch - the setting for both is easy to get to so only takes a few seconds. (On the phone, I do a double slide-down, and there's an Airplane option. On the Pebble, I've set up a long-press shortcut to toggle it.) Given my routine is fairly regular - young kids wake me up early so not many late nights - I'm thinking of using an automater like IFTTT or LibreTasks (for free software fans) to toggle Airplane mode. Making power management easy is the name of the game, when it comes to getting a process and mindset in place.

Fairphone have also announced that Android 7 is coming , probably in the next month. The default power management will be different again, so expect some new experiments when it hits.