Another breath of sunlight

Feels like it's been raining for months now, but not giving up yet. Nearly on the 8 month mark and hoping for a few more days like this. 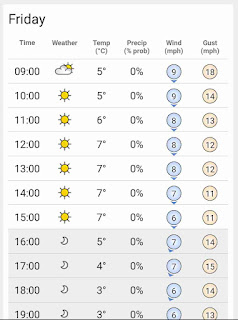 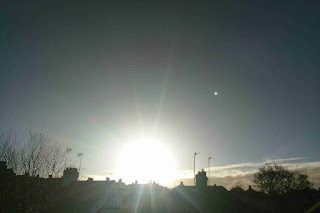 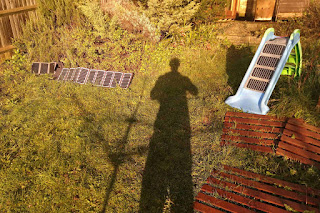 Think I might have broken my charge controller though.

Posted by Scribe at 9:28 am No comments:

Hey world. I got a partially cloudy day when I was at home, which I've been hoping for since my last post, so I put the solar controller out hooked up to my larger 60W panels and my cheaper 10Ah battery - at least it''s cheaper to replace if something does go horrendously wrong, huh? The clouds were quite high level today, so it was continuously semi-bright, with a bit of variation - not the massive clumps of grey/blue that were in vogue a few weeks ago. I slurped just under 2.5Ah into the battery, which is OK for a few hours, and better than nothing - given the grey clouds in the week ahead's weather forecast.

So I'm pleased it works, at least. The controller screen doesn't come on, but I have no way of knowing if that's because of my weird setup. Maybe I need to find someone with a battery and some knowledge on this stuff nearby...

Which leads me into the other part of this post. I finally caught up with the solarpunks.net RSS feed, and watched the two videos of Jaimie Mantzel's island life. Worth a watch, even just the first one of his solar sail/panel boat.

What most struck me wasn't the engineering, but something else - the resourcefulness. This has been an attribute of people I've always admired, and always seems central to that hacker mindset - that things are possible if you get creative. I love that sense that you're not waiting for somebody else to OK something, or even to teach you something. You have an idea, you can get hold of what you need - even if it's not what you expected - to make it a reality.

Resourcefulness seems like a key aspect of a solarpunk world, but I don't even know if it's something you can teach.

Either way, I need to reconnect to my own resourcefulness as I carry on picking up electronics stuff. Learning is nothing without creativity.

Posted by Scribe at 9:41 pm No comments:

Current status: Can you hook a USB battery up to a cheap solar controller using a 12V-to-5V converter? I looked in online forums a lot and couldn't see anyone saying you couldn't - to be honest, I couldn't see anyone asking either. So. Punk it - 20 quid and some sunshine and let's find out: 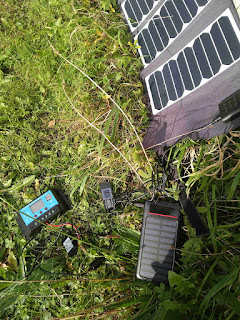 60W panel top right, going to solar controller in blue on the right via a DC cable. Then through the converter mid-bottom-left, out through the USB voltage metre in the middle, to the battery bottom-right.
And technically, yeah, the battery still charges. Initial tests show the output from the controller swings around a lot more wildly than plugging the battery straight into the panel, which probably makes sense as we're in unchartered territory? And the panel makes a high pitched noise but I read that that's a common thing cos frequencies.
I feel like it sort of works, but (instinctively?) maybe I'm more likely to kill the battery faster cos of the power fluctuation. And I haven't seen what happens when the battery is full - it should probably shut itself off, unlike a lead battery. The use case is really when the sunshine is patchy, or I want to put the panels out but the sun isn't up yet. Need to run some tests when I'm at home on a partially-cloudy day. Maybe that'll happen now the weather is getting cold and crisper.
On the plus side, still going strong despite a long run of wet weather recently...
Posted by Scribe at 8:34 pm No comments: