As sun is a rarity this month, I'm getting a little tetchy about battery usage now. The weekend should bring something though, so I'm hoping I'm in the right place at the right time. Sometimes I think my solar harvesting is more like trawler fishing than crop harvesting.

In the meantime, I thought I'd gather together all the kit I'm running for a few "family" photos. I missed out a few things, but I think it's nice to see what it largely looks like for real. Maybe I should even start videoing this stuff? 😐

So here are some pics - I've also added them, with more detailed info about what's in them, to the new Kit page on the blog. I'm hoping to start building up a bit more of a reference guide here, now that I have some bigger pockets of time around. 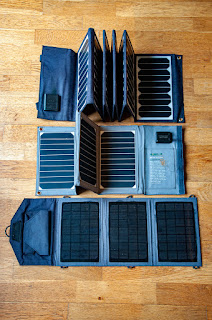 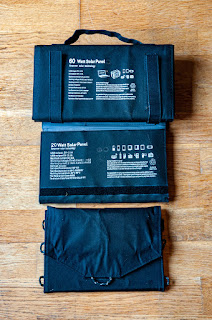 The batteries and cables: 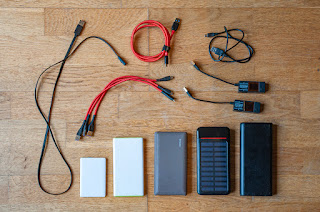 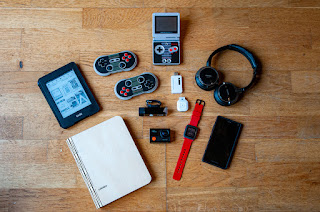 Posted by Scribe at 2:15 pm No comments:

The Challenges of the Joy of Autumn 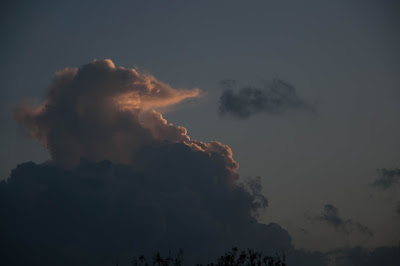 Autumn has traditionally been my favourite season, the recuperation from the haze of summer, heralded by muted rainbows emerging from trees. The promise of cozy evenings ahead, yet still the warmth to enjoy the air, a sense of work done, crisp and fresh smoke-tinted breezes.

Past the autumnal equinox, solar power becomes much more of an active challenge. Gone are the lazy days of sunshine embracing waking hours from beginning to end. Long shadows and longer nights cut in round buildings and jagged trees, slicing up beams into bursting energy sources. The sun moves fast across the sky and all the cherished angles have shifted, threatening precious efficiency powering your settled routines.

But this challenge is part of the seasonal cycle, and what makes solarpunk gorgeous. Nicholas Haney asked whether Solarpunk is a Pagan thing, and noted that "we face a lot of challenges in the days ahead ... I think we can build a renewable civilization and weave nature and culture back together." And weaving technology into the strips of sunlight, every day the sun gets lower is another day I'm thinking about the fragility of energy, the dependencies of this net that surrounds me, and the assumptions of my every action.

I have retreated my panels to the top of the garden, and am noticing how the extra battery and larger panel make such a difference this year. A tropical season has settled, with most days being fairly grey or wet. Heavy showers with fat droplets have swept through overnight this week, accompanied by large marshmallow cumulonimbi clouds worrying the charge controllers buried in my batteries like sleeping worms. A few minutes of heavy cloud has the potential to switch off the charging circuits.

Fortunately, there have been enough cloudless days - or, rather, days which are bright enough, when the cumulus shapes have given way to more strata-like formations, acting more like a lightbox than a puppet show. My 60W panels have given me a real boost - overcast days still often have enough voltage in them, and even though the days are shorter, a sunny day or two means I can mostly max out one of my larger (20,000+ mAh) batteries. 60,000 mAh of storage is enough to last at least a week if I really want, so when I've not been able to charge up, I've still had one whole battery on standby.

This contrast shows how one can run a 'second level' of USB-based solar power these days. Where 'level one' is probably under 50W, 30,000 mAh, and costs under a hundred pounds, its usage is limited to optimal conditions. I feel like I'm a stage up from that, and a step down from doubling the cost, and being able to bring in a solar controller for more automated sufficiency.

But currently I still enjoy putting the panels out in the morning, taking them down like washing in the evening. My main enemy is the wind, in the these parts - the few times I've put my panels on top of an aging shed, I've come home to find the panels down in the garden waste, blown off by the strong south-westerly whirling around. My new battery has luckily had its fall cushioned by decaying iris branches, but I don't want to continue the risk.

Still, I don't think this will work well for the winter months. Yet it seems a shame to waste the sunshine based on my routine, rather than my technology. I'm around the house a little more these days, which means I'm able to grab a sunny patch when it coincides, but that leaves a fair few days where the shadows and schedules still conflict. I'm over 6 months in, and don't feel threatened by shade like last year. Let's see what happens.

Posted by Scribe at 8:45 pm No comments: