I wanted to start the 6suns blog with a re-post of a write-up I did at 10 weeks of running off solar power, which was originally posted at my main blog, De-scribed. Apologies if you've read this before, but it's a good place to start... 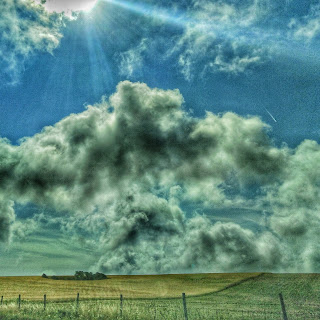 Last weekend, mid-July, marked the 10-week point of running my phone and my watch off solar power alone. I figure if we're going to turn the British summer into a molten hellpot through global warming, I might as well benefit from it. Here are some notes on how I've done it (not complicated) and thoughts on what I've picked up along the way (not profound). I did also run for about 3 months on solar a few years ago, with a different setup, but the gist was the same. It's good to know not too much has changed compared to back then. Broadly speaking, there are three main things that I think are useful when moving to solar power at this level: hardware, including solar cells (natch), an understanding of battery use, and the right mindset. Bear in mind that this is a fairly amateur approach to solar power, intended to run USB devices only. More nomadic people, such as those with camper vans or house boats, have bigger setups, which I haven't looked into yet. My main aim is to be portable with just a rucksack, if I want to be, and to power a bare minimum. So here we go... [ Note: Forgot to add in my routine here, will update later to include thoughts, but generally I just charge up when there's good Sun ;-) ]

I fairly rigidly stick to charging my devices from USB batteries, and charging the USB batteries from solar panels. I've read that the draw from phones is more 'controlled', which makes it harder to charge fully - and it certainly seems hard to reach 100% battery on the phone when plugged straight into the solar panels. But sometimes the direct charge is useful. Anyway, here's my current setup:
Previously I've also charged up headphones from solar power, which I might start doing again. My Kindle didn't seem to like being charged from a battery, which was annoying, but I don't use it too much. A future plan is to also revive one of my Pirateboxes, and run this off solar power as a portable wifi hotspot - for p2p networks such as Scuttlebutt? Oh here's a picture of the two batteries being charged up. 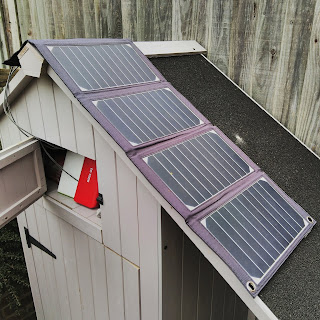 It's helpful to find a standard place to lay the solar cells out, that faces the Sun, and isn't obstructed by shade. I've had spurious results starting out charging in shadier conditions - I'm not sure the charge increases when the Sun comes out more, but need to do better testing here.


Once you have the ability to charge batteries from the Sun, and devices from a battery, you're basically good to go. The second useful thing is to then control how your battery is being used - this will sort of come naturally once your phone is being filled with precious, inconvenient energy, but here's what I get up to.
Otherwise, battery usage is one of those ongoing battles. After a time though, it can become almost ... fun? A challenge, if you will. Which brings me on to....

This, for me, is the most interesting aspect of the whole exercise. Why do we take electric power so much for granted? How do we know where our power comes from? Why are our devices so geared up for continuous usage, and an addiction to perennial consumption? Why must there be an app for everything, instead of just letting things happen offline? There are two main aims of running off solar power: first, be resilient by decoupling from megalithic power networks. Dependency on something which you can be cut off from isn't something that the taopunk aims for, so independence is to be valued. Yes, we're still dependent on people making the devices and the solar power and the software, but that's a different conversation :)

The second aim is to rely less on constant power, and to value the potential energy that we do have. It's an interesting exercise to realise that your phone will shut down - and with it, your connection to the whole world - if you fritter away your battery on novelty games. If we want to preserve what we have for later, we need to take our time, relax, find other things to do. Convenience is a luxury, but one we've grown used to. Which isn't great. So I've found myself much more closely tied to the weather through this. I check the forecast daily, and how I use my phone is dictated by what the weather looks like over the next week. I will hold off heavy usage for a day if it's cloudy and my battery reserves are low.

There's a certain hard limit on my tech usage, which I like, and the hard limit comes from nature itself. That restriction forces some good practices. A focus on Efficiency for one. A push to Do Other Things, to look around and sketch instead of stare at a game, for another. Basic, so simple, yet so forgotten. Given the current heatwave in the UK, I think I could expand to using all 30W of my solar panels and run off 4 batteries eventually. This, in theory, would keep me going for a couple of weeks. At some point, the weather will switch though, and the solar route will fail me. I'm trying to work out how to get to a point where I can keep going through the winter - should I charge up more batteries? How many would I need to get through, say, October to April? Or should I go full 12V solar panels like a proper nomad? Anyway, hope that helps.

Please do leave feedback here, or via Twitter (@6loss) or via GnuSocial/Mastodon (6gain@loadaverage.org) - I'd love to hear about others' experiences, and any tips for improving what I have. It still feels like there's a lot of potential here...
Posted by Scribe at 6:51 pm