2 Years On: What Have I Learned

The start of April marked 2 years running fully on solar panels for my kit - neat! It's become fairly routine now, although the routine (and the garden) has been helped a lot by being at home every day 😐 and being able to quickly adjust angles, or not worry so much about rain.

I thought I'd celebrate by getting in some new solar panels - more on this to come, but after some browsing (and noticing that panels seem to have short production runs, and seem to be a bit pricier?) I've gone for some slightly generic 60W MathRose panels, as my last 60W set have been so influential. The new aim is to try running a laptop from the extra set and the big battery that's sitting around. Also, those MathRose ones are cheap.

What have I learnt in those 2 years then? Was it worth it? Here's some quick thoughts on it all.

And probably lots more too. And not enough. I'll try to follow up with what I didn't learn that I would still like to. And get on the case with details about the MathRose panels. (Spoiler: Early results are good.) 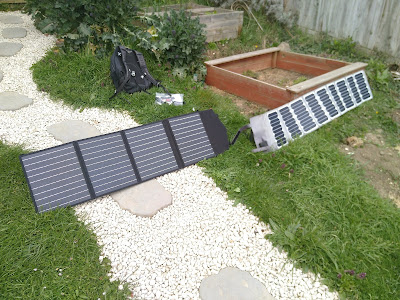