A summer of battery and vegetables

Well it feels like a long time since last posting - much longer than it's actually been. Summer came and went, temperatures reached records, home working and home schooling have placed a few extra demands on life, but hey hey, I'm still here.

I also haven't posted here much because the stuff I used to write about - cables, batteries, phone power management, etc - have largely been pretty robust. The larger, 60W solar panel from last year mean I haven't worried about running out much, and the balance between generating energy and using it has been fairly settled. Score!

Some things have changed though. First up, I've been playing with the Allpowers 372Wh battery a bit more, and have been seeing how long I can run a laptop off it without having to plug into the mains. 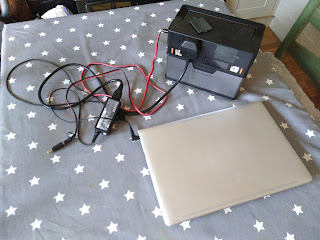 This feels like a nice 'step up' in terms of experimenting - I like using my phone for some things, but hate writing text on it, and I've decided I want to do more of my writing on a proper keyboard, but solar powered. But laptops often have a lot more energy overhead, so I already have to 'take that decision' to use extra power for a more comfortable writing experience. But also, just thinking through the purpose and efficiency of a laptop in general.

(The laptop is from Entroware, running Linux with some power-saving tools applied. I do also use it for some games, which is a whole separate post or two.)

Charging the big battery takes around 2 or 3 days of full sun to charge, so I'm working out a new routine - I want power available to the laptop when I need it, and the Allpowers can charge everything else, but I also want the option to charge my smaller batteries for more nomadicism when needed. I tend to charge the big one up if it's less than 50% full.

So that's been happening since about the start of June. I think I've plugged the laptop into the mains once in that time. Not bad. 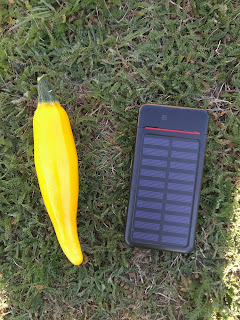 The second thing happening is just more time outside in general. Working from home has meant being able to spend a bit more time looking after my meagre veg patch, and I've noticed more Permaculture ideas and posts seeping into my Beamspun newsletter.
This is actually quite exciting to me - exploring where our tech and energy comes from seems to sit very neatly alongside where our food comes from. In fact, both are just forms of energy, so in a way it makes no sense to separate them in the first place!
I haven't got any 'formal' ties between the two, other than the solar panels sit among the courgette plants, and there is a sense of ability to wander - to be able to use tech while among nature, rather than being detached from it.
More soon.
Posted by Scribe at 10:11 am