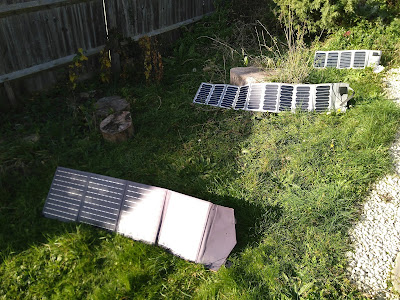 A full array today, set out quickly to catch the pale autumnal light - cold today, for a change! The overnight dew makes the worms' piles of soil glisten around the garden.

After 6 months, I decided to revert laptop use back to the mains grid. About the same time, my renewable (or REGO-based) energy provider went under, and the subsequent shake-out meant we're now with Shell, which is something of a step down for me.

At the heart of a lot of energy-focused efforts is resilience. Resilience to what though? I don't have many terrorists in my area, but I'm aware of panels being visible to passers-by, and being fairly nickable. And at the other end of the scale, I'm aware that global governments can withhold gas to gain leverage in huge contracts worth billions of pounds. In between, national markets veer and flutter, and even when one can switch easily, there are still times when the choice still boils down to "the market".

For instance, I was happy running my self-hosting Raspberry Pi server under a 100% renewable energy provider. Now that the underlying provision has changed to a less renewable source, that affects things. My flexibility choices are: 1. to switch provider again (an alternative route, same ends). 2. to shut down my server (a more drastic change in aims). 3. to move the services being run to a different server (same ultimate aims, but a reconfigured stack), 4. physically move the server to somewhere powered more greenly.

At this point, the question is more important than the answer. What the options above are intended to show is that we achieve an aim through a supply chain, and by mapping out that chain, we can lay out more "decoupled" options for action - or identify the "points of interjection", which are a key element when considering how to make efficient changes.

Will update more in due course.

I've been considering roof-mounted solar panels recently, and chatting with people who have them already. (Spoiler: The time isn't right for us right now, but the price was feasible under part of a local community-purchase scheme.)

All of which has made me more keenly aware about a sense of scale as I put my tiny micro-panels out into the sunshine. Why bother with device-scale solar, when roof-scale generation feels like just a more "sensible" level up? What's the point of trekking up and down the grass just to save a few watt-hours?

And I keep coming back to the portability and the immediacy of micro-solar. Sometimes it almost hits me as a "visceral" approach, a direct relationship between me and the Sun. A ritual that demands attention, makes things more real, like feeding a pet. And with that - I hope? - a kind of respect and mutual relationship that develops, between me and .. what, the universe? Or whatever it is powering the cosmos. We're here, borrowing energy, leasing life from the great reservoir.

And with that immediacy comes a sense of ... existing within the system, a positioning, a sense of belonging even. It is, I'm aware, a geek version of gardening and growing your own food - that energy is circling, is captured and converted, and siphoned into a million forms of life - to the point where we can't distinguish between "being alive" and "energy being channeled".