A Summer and a Half

Holy cow, it's September? Well.. that was a bit of a summer. I'm sorry for neglecting you, blog.

I have my reasons. It's been a long and strange few months, in many ways. I ended my gainful employment at the end of May, which meant I was busy finding a replacement and getting ready to leave, followed by a month or two of just downtime and taking a bit of a break. And to find my next passion, and all the admin that goes along with it. And to look after the children and build a shed and all that.

I watched the heat dome build through news stories, and the bindweed grow in the garden like it was on timelapse. I was so busy that I admit I had to give up on much of my veg this year, but the potatoes did well. I think my first (and only) head of corn is ready for picking now.

And I also managed the feat of running my laptop off solar power only, pretty much from the 1st of April to the 1st of September. There's still sun left in the sky though. I plugged into the mains a few times when I needed to backup some photos, and otherwise 3D gaming is a large draw on the system, which I got back into recently (I wanted to try out Phasmophobia.)

I'm a bit torn between solar power and gaming. As Phil tweeted, there isn't a big "solarpunk/gaming" community that I've found (maybe I should look harder, or start one...), and it's easy to get pulled into just assuming that GPUs and desktops and latest-greatest-hardware is the default. I don't want that. It's why I like the old GameBoys so much - they're effectively running off air, as this chart shows: 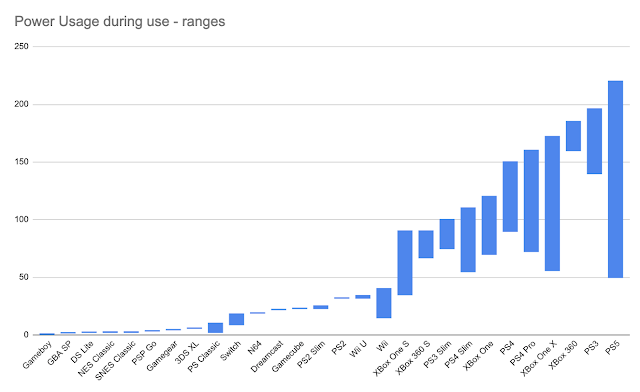 I believe it's possible to entertain oneself with limited energy - with the right mindset, a simple pack of cards - or a pen and paper - can keep you occupied for weeks. I'm not a fan at all of the unabated relentlessness of needing to stay up-to-date. That's a social multiplier that's killing us.

I'm pleasantly surprised on how painless running the laptop from solar has been. One of the fiddlier bits has been that I often want to work inside, but the battery needs to be outside to charge up, so I just have to make sure I have enough battery in the laptop to then catch the sunshine at the right time. There's a gentle balance between "productivity" and "replenishment" there, although there's obviously the phone and other devices which act as a broader network for getting things done.

To cope with that "multiple devices, multiple batteries" setup, I'm using several ways to pass around content, such as:

The most unexpected thing has been the weather - as it turned out, August was so warm that there were heavy clouds for a lot of the time. I was also going out a lot, so if the weather was mixed, I wasn't able to get back to rescue the panel and battery from any sudden downpours of rain, and so didn't risk leaving them out.

May and September are the "new summers" where I live, I think. The temperature now is warm and sunny, but importantly things are predictable. Back in August, you couldn't trust the forecast or the cloud build-up.

That unpredictability fascinates me at one level, but will also prove to be a barrier for anyone trying to model their energy from renewable sources, I think. (I write this as the UK goes into some pretty major energy problems, and the term "perfect storm" is being used increasingly.) It has important knock-on effects for energy pricing, siting of panels and turbines, and planning for contingency energy generation.

And, honestly? I don't think we've got our head round any of that, as a society. We're so used to energy just being there for us, and we're so abstracted from the world it comes from that sensible democratic discourse is sooo hard. Transparency and in-depth engagement (eg citizen's assemblies) could do wonders for this, but in the meantime major price shocks will likely be the most influential factor, sadly.

Anyway, it's a full moon today, and the equinox tomorrow. I'll be doing stuff with my Beamspun newsletter at the weekend, so head over and subscribe to find out whatever it is.