Contrary to popular opinion (ie my ruminations on finishing up with solar power for winter, last post), the batteries are on half-full now. Bluetooth is back on. I'm writing blog posts. What happened?

A few days of sun blew in over the weekend. Sadly, I was out of town, and carrying my panels with me was it if the question. Necessity being the mother of invention, I "rigged up" (ie moved) an old drawer which had been sitting around on the garden for a while. A piece of thin, spare wood sits in front to stop rain getting in, and the panel has a nice long stretch to lay out in. On one side, a rubber band dropped by the postie straps the corner to a raised flower bed. On the other side, I'm still trying to figure out the best way to attach the velcro straps to the side of the drawer. 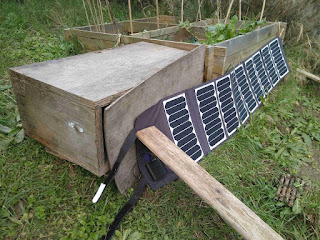 But it works. Despite the wind and rain and hail coming in, despite the freezing temperatures overnight. I've been able to leave a battery out in the garden all weekend, and another one after that. My panels are independent, which isn't as scary as I always thought it might be.

A couple of knock-on effects. One, I've had to look up the effect of freezing Lithium Ion batteries. Looks like, in general, it's not too bad - high temperatures are bad, but below zero is only really potentially problematic if the battery is fully charged, and freezing reduces the capacity, like shrinking a bucket full of water. Except the battery could be explode, instead of spilling water down the drain. One to watch. 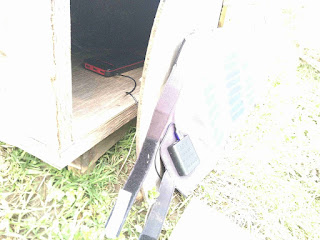 And second, it's reinforced the idea that solarpunk is all about resourcefulness. Take what you can get. Look around you to see what's on hand, what can help in your time of need. That's a tough one if you're not used to that - I'd love to talk more and find more resources on how we do that as individuals, and as groups. "Resourceful communities" or something.
And yes, finally, I should definitely also give names to my batteries...