For 6 months of 2020 I was wondering where the rain was. The clay earth in the garden dried out, and ants scurried between merrily along the pathways of cracks that opened up. The duckpond dropped until early walls and old statue plinths resurfaced.

Now we lurch into winter, and I'm wondering when the clouds will disperse again. In a traditionally British way, there's been precious little sun, and when it does come out of hiding, it carves its low fast curve across the sky, skimming the chimney tops.

So I'm stretched - I've hit a half-battery of power left a couple of times. But, necessity is the mother of invention. And I figure the goal of all of this is not really to run off solar power as such, but to learn as much as I can about the process as possible. There's a risk in life that you get comfortable and reach a local maxima if you're not careful - that you stick with what is working. But that can risk ignoring opportunities to experiment, to learn new ways of thinking and doing - and in turn, that risks getting blindsided when all the factors making you comfortable shift and slide.

To frame experimentation and encourage yourself to try different things, it often helps to have an "acceptable safety net" or set of fallbacks. In my case, I'm trying to balance learning with a sort of 'solarpunk value set'. On one hand, I want to learn about how batteries and power efficiency work a little. On the other hand, I want to run off sustainable energy as much as I can. But experimentation means upsetting the balance between the two a little to find alternative approaches.

In theory, I could have experimented earlier, when I had more power around. But gluts make us lazy, or allow other experiments (think of all those "odd" recipes you try when you know you have a spare batch of ingredients in case things go wrong...?) So I think it's fine to get back to basics when the nights start drawing in.

My experimentation is falling into two parts - modifying existing behaviour, and finding alternatives to what I'm doing.

1. Modifying existing behaviour - Reconfiguring devices to be more efficient, and reconsidering my use. On top of clearing out apps, I've switched to trying out Accubattery as an Android battery monitor. I've also switched from using DNS66 to Netguard as my 'blocker' Android VPN-style service. I'm seeing adverts again, but locking down apps more - I'll see how that goes.

I'm even letting the battery run out a lot more - yesterday, I got "caught out" after taking some photos in town, and the battery ran out without having a spare on me. I traipsed around with the family, but it was something of a relief in the end, not having to worry about missing phone calls, messages, or photos. It made me realise how much the "convenience" of being always-on means you stop thinking ahead, and just rely on a quick message in times of "mild peril". And it made me want a decent camera I can carry around more easily than my SLR.

With reduced usage and a few app switches, battery life is doing pretty well, as the following line shows: 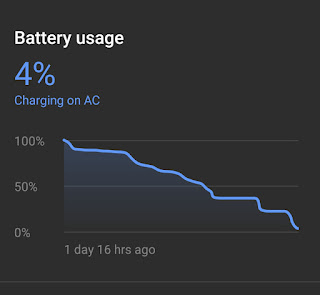 I'm intrigued as to how well this compares with others - maybe I'll start a survey of how often people charge up their phone, or something.

Also, it means I'm reading more papery books and magazines again, which is good - my reading backlog is not a thing to be trifled with.

2. Finding alternatives. The fundamental lack of sunshine is a bit of a killjoy, on the other hand. No matter how much I optimise usage and behaviour, if there's no sun then there's no sun. Then what?

I can map out my "safety net" - the systems that I fall back to - pretty simply at the moment:

That is, if my batteries run out, then I can plug into the wall. We're signed up with Pure Planet, a proper renewable-green-backed energy supplier, which helps. But is a whole world away from that whole 'solarpunk' disconnected idea.

How could I extend out that safety net map to factor in more diversity of local energy supplies? What other levels and fallbacks could go in there? 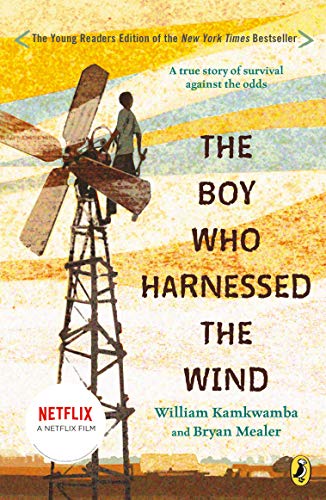 After reading William Kamkwamba's book, The Boy Who Harnessed The Wind, I think about the simplicity of dynamos a lot more. I live in a windy part of the world, but do I have the skills to build a windmill? Even then, dynamos actually require a fair bit of power and/or time to generate a sizeable amount of energy - would I have planning permission, robust architectural skills, or the time to cycle around for a few hours a day? Some kits are available though, perhaps it's worth experimenting.

(Side note: Could courier services double up as dynamo'd energy suppliers in a local setting? eg Could a team of local delivery cyclists also drop off and collect recharged/discharged power packs to the local community on their rounds?)

Or what about installing waterwheels in drainpipes and waste water pipes? We don't have much constant rain and don't bathe all day, so I'm not sure how much it would generate. Still, perhaps there is a small-scale opportunity to use water as a battery - use electricity to pump water higher up when the sun is out, then release the water into a waterwheel-dynamo system when the clouds are persistent. Water-as-battery is so simple (in theory). And this isn't a million miles away from all those solar-powered fountains down the garden centre... Hmmmmm.

Anyway, I haven't decided anything here yet, but am finding it useful to have a hierarchy to work with, as each step of that can be planned out in its own, decoupled way. I like this idea of modularising our supply chains more consciously and openly. It feels like a useful way to share knowledge and skills too.

Thoughts welcome - I feel like I'm at the start of a good direction here, but I'm not sure if it's one path or many, at the moment. There's a tiny bit of sun this weekend though - I'm still managing to resist giving up. 20 months and counting!