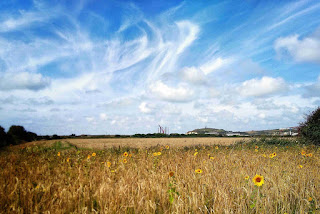 August 22nd, and I'm getting some creaks. Mentally, I still think it's mid-summer which might be true-ish for temperature, but not for light. We're now 2 months after the solstice (1 month until equinox!) and the shadows are shifting rapidly.

The daily pattern of shadows affects me depending on my daily pattern of life. It's easier to work around the shadows if I'm around the house during the day - but if I'm out, like at work, then it's trickier. I still suspect that the electronics inside some of my batteries throttle the charge if it's too low, and don't unthrottle it when it picks back up again. If I start my panels out in shade, then I don't seem to get much charge even if the sun hits them for a full day starting half an hour later.

I think I'm going to need to look into solar controllers more... (Or work from home 😏)

I'm also being confused by my batteries not charging properly with certain combinations of panels. Having run some tests yesterday using my USB power measurers, I'm now fairly sure my big old red battery is playing up, so maybe it's time to replace it. But it seems to have a knock-on effect when I plug in a different battery to the same panel, and I get the same charging problem - but then a while later it seems to work. Hmm.

I was out collecting the first crop of early blackberries yesterday, and the strawberries in the garden are dying away and rotting now. Autumn is on its way, and it feels like time to start preparing.