This post marks the 6 month milestone of going solar-powered, which is about twice as my as my previous effort. The phone I'm writing this on and the watch it's connected to haven't seen mains electricity since the end of April.

Even better, we're now into the start of November, a month and a half after the equinox, and my three little batteries are still pretty full. 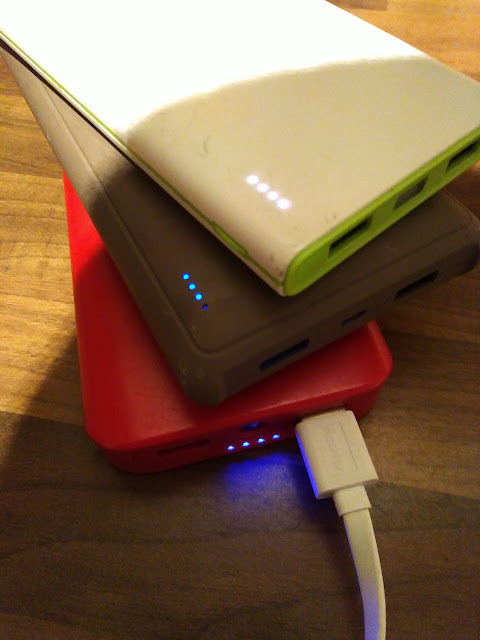 (The grey battery was on 4 lights, but dropped to 3 in the five minutes it took to get the photo...)

The extended summer, probably thanks to climate change, has seen fairly dry weather with a decent amount of light recently, and I've been able to keep things topped up despite often having to start off in shade, and unplugging batteries in the 6pm dark. The grey battery seems to charge up whatever, but Big Red may possibly prefer to start with some voltage - I'm not convinced it charges if it starts out in the dark, with sunlight showing up later on. A simple experiment with some shade and a USB power meter should tell me though.

More generally, I've been mostly occupied with issues of space, and the idea of land ownership that goes with it. In built up areas, the big challenge of winter is in battling the long, pendulous shadows which are much more pervasive and unpredictable than in summer. My old charging spot is no longer viable. And while we're lucky to have a decent sized garden on a south facing slope (despite the effort to mow grass up it), I'm aware people in flats or smaller plots might struggle to find a decent spot as the sun gets lower. I can think of a few places I've lived where this experiment just wouldn't be viable past September.

But this is turning into a different, socio-political question, which I'll return to one day. For now, I'm concentrating on the basics - such as being ready to come up with a suitable tilting mechanism to hold your panels. Or "appropriating" whatever you can find lying around that fits the bill... 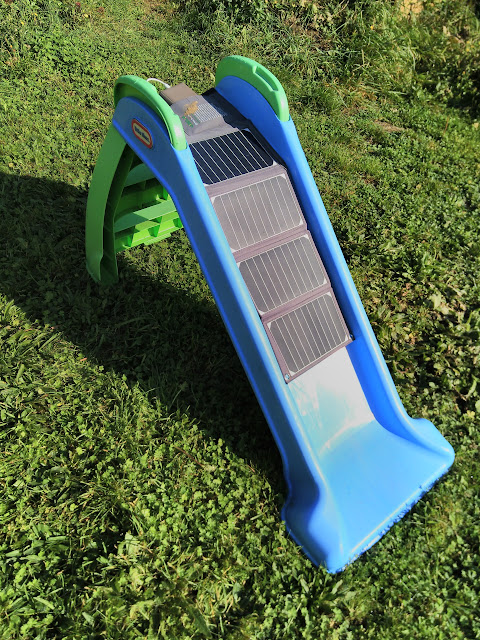 As I try out different places, I'm becoming more aware that being able to either fasten your panels and batteries, or get them at the right angle, is a key part of 'nomadic efficiency'; portability is one thing, but effective portability is another thing entirely. I can imagine an accompanying set of travel utilities, such as carabiners, bits of string and wire, and lightweight angled blocks to get everything just so. And that's assuming you don't plan to track the sun as the earth spins on, soundlessly and endlessly.

Anyway, time to sign off to save on battery. Keep your leads short, your screens clean, and your software lean.
Posted by Scribe at 3:31 pm